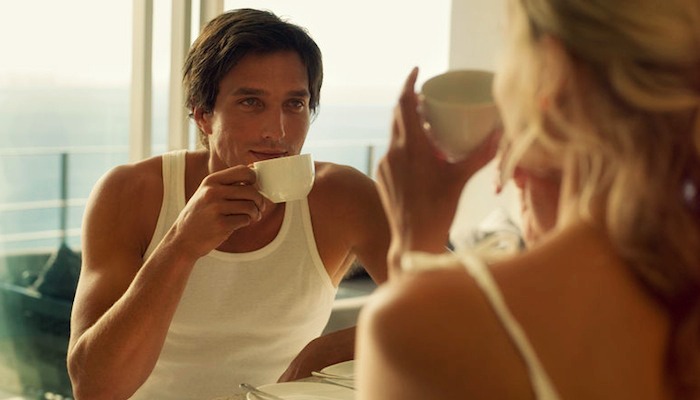 Before I started dating the guy who would become my husband I crushed hard on an older guy who looked like a Botticelli painting and had the voice of an angel. He was intense, dark-eyed, and gorgeous, and I was smitten.

Dan had little interest in me. And when I say little, I mean zero. Nada. Nothing. He was sweet and kind to me – but he was that same way to everyone.

But my heart tossed itself off the deep end without consulting my brain.

And once I finally wised up, there was a long crying jag, and I felt like I was looking through bruise-colored glasses for a while.

It was only much later that I wondered how I had EVER thought Dan “cared” for me. He was a sweetheart, just not MY sweetheart. I was not his girlfriend.

“Dear Claire, I met someone last summer. We slept together the first night. In my head it was going to be a one night thing and moving on. Well he didn’t leave early the morning and only left around lunch time and wanted my number and added me on FB. He said he really liked me.

I was busy moving to that city from another one and I found a room and asked him if he wanted to stay with me and pay half of the room and he agreed.

After living together for a while he told me he is not in love with me but he loves me. I was devastated but we continued to live together.

Later he moved out, but we ran into each other again. I took him home with me and we slept together but he told me he didn’t want a relationship, and even though we lived together again shortly after that. But he never took me with him to parties or to night clubs or never introduced me to his friends etc. His friends threw him a big birthday party and didn’t invite me, I was very angry and couldn’t believe someone would do that. Anyway he still stayed.

Then last fall he broke up with me and I was devastated again.

Then he was staying with me briefly while he waited for a new flat, and we got close again and I was on his laptop. I know it is bad, but I couldn’t help myself I had to see what he was up to. I logged into his FB and checked the messages and saw he was dating another woman. I was absolutely devastated and hated him. So while I was on his FB I wrote to her asking what was going on and that he was living with me for about 5 months and what the heck is the problem with them.

He came in and realized something was up. He took his phone and saw the FB messages. He took all his stuff and moved to his new flat. I told him that he was a liar and a cheat. He was saying we were only friends. I said we were living together and had sex and cuddled like a couple all the time.

Well we are still friends. No sex but the desire is there. I really love him and I know he loves me, but he says he doesn’t love me the way I love him.

I tried meeting other guys. I slept with two but I didn’t enjoy it at all.

It’s clear to me that this man is not in love with you. He has enjoyed sex with you, has appreciated having a place to stay with you, and has spent good time with you.

1. He was very clear

But he was clear over and over again that he didn’t want a long-term relationship, and as far as I can tell, he never agreed to be exclusive with you. He told you he doesn’t feel the same way you do. He said you were only “friends.” You’re not his girlfriend.

I know you cuddled, had sex and lived together, but those things don’t automatically make you a serious couple, just friends with benefits.

You broke trust with him in a significant way by getting on his laptop and by contacting the other woman he was seeing. It’s pretty impressive that the two of you have managed to continue to be friends after that.

You’re intensely focused on him right now. You got a lotta drama here, and it isn’t helping you.

Your best approach would be to turn that energy toward building your own dreams for the future, and dating other guys.

And being more clear in your next relationships about boundaries and expectations you have.

The same is true if you get back together with this guy. The two of you need to agree explicitly on how things will be, whether you’ll see other people, and start building trust again.

The first few items may seem obvious (when you’re not in the middle of a mess), some of the ones lower on the list are a bit more subtle, and you need to pay attention to really notice them in the relationship…

14 clear signs you’re not his girlfriend

Your checklist for shifting your focus and rebuilding your life

After you allow yourself an all-out crying jag, here’s what you do…

1. Invest time/energy/focus in your passions, a favorite cause, or casually dating other men.

You won’t really be able to get your mind off this guy until you dive back into your own life. Go back and pick up your passions, your schooling, your career, or your fabulous business idea.

And start casually dating other guys.

2. Don’t immediately jump into bed with guys you date.

Sex does not equal love, or even a relationship. And if you’re the type who tends to equate the two, keep things clear for yourself and don’t strip down and dive into bed; do yourself a favor and wait.

Remember, this is “casual” dating — where you don’t invest everything from the get-go.

3. Get help from people who care for you and have your best interest at heart.

Talk to a trusted friend or mentor — someone who has made a successful relationship for themselves and can help you make better choices for yourself.

You really DO have power in this situation! So go ahead and grab it.

When you’re tired of “low-investment” relationships, and are ready for COMMITTED partnership…

If you’ve ever wondered why it seems so difficult to find a high-quality man for a long-term, committed relationship…

You have to hear what this very smart, very interesting woman has to say.

She was raised (from the time she was a child!) with a secret passed down from her mother that most women NEVER learn.

And you can get the same results with your man.

If you have ever asked yourself, “Where are all the good men?”

No more wondering why he’s not pursuing you… the way men used to.

No more trying to “test the waters” and see if he’s ready to commit.

And no more struggling with the agony of not knowing if he’s truly yours.

PS: And listen, if you’re with someone now and you decide to move on at some point in your life, it won’t matter.

You’ll have the rock solid confidence of knowing you can not only attract a great man into your life, and you’ll also have transformed into the kind of woman who can easily keep him.

How wonderful would that feel!?

To know that you never again have to worry about being alone, because you’ll have the one thing men desperately want in a woman (and never get).