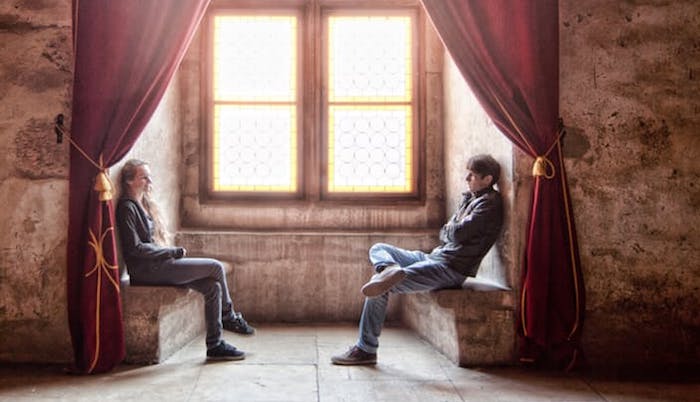 He only wants to engage when everything is about him. But what about your needs? Is he being self-centered? How can you find some balance together?

Is he being self-centered, or is he just unaware?

“I have been dating this man for a month and a half now and at the beginning, our conversations had a flow, I enjoyed spending time with him and we could be honest with each other. However, in the past couple of weeks our conversations have become very dull. He either talks for a really long time about himself (but when I comment on it or offer another conversation topic, he interrupts me consistently or dismisses it with short one-word answers) or he doesn’t say anything at all. I don’t mind having silences or pauses with him, but I am at a point where I feel like I can’t really talk to him about anything because no matter what I say, it doesn’t seem to interest him unless it is about himself or his own interests/hobbies, and so I remain quiet or get immediately annoyed and frustrated.

I don’t know how to approach him about this, because I don’t want to suggest he is boring or egocentric. He said in the past that he didn’t feel the need to talk to me all the time and that even if it didn’t seem like it, when he was with me he was always listening and always present. However, I find that hard to believe when I don’t feel like we can communicate as easily…

I think you could easily have an insightful conversation with him about this issue, Mary.

The secret is to not talk so much about him, but to make your conversation about what you’re experiencing and feeling. You don’t have to tell him he’s being self-centered. In fact, there’s no need to be negative at all.

Here’s a script you can try right away…

“We’ve been dating for almost two months now, and I’ve really enjoyed spending time with you. I especially liked how our conversations had a flow, how I felt we could always be honest with each other. But recently it seems like there’s been a change in that. I don’t think we communicate as easily, but I’m not sure why. Can you help me figure out what has changed?”

What he says will give you some insights into how he feels about you. Most men appreciate an honest appeal for help. Guys love to be asked to accomplish a task that will help a woman, and it’s especially true if they can help a woman they are romantically interested in.

Also, without even knowing the two of you, I can tell you one big thing in your relationship that HAS changed…

When you fall in love, EVERYTHING moves easily. There’s a chemical fizz that makes it all seem good and right and perfect. And easy! But once that initial chemistry fades (and it always does) it’s up to every couple to begin doing the work that builds and maintains a relationship.

Sometimes guys come across as self-centered. Sometimes they really are. But most men learn to dial back their self-centered focus when they realize the woman they love also has needs.

But he can’t read your mind, you have to be willing to have the conversation. Sometimes you even have to have that conversation a buncha times!

That’s the work of a good relationship, y’know?

If he has been rude or dismissive, he needs to know.

And letting him know WHEN it happens is key. You don’t have to say the words “self-centered” or make any accusations.

“When you waved your hand just now and changed the subject, that felt dismissive. Is there something going on?”

Because asking the question MAY actually reveal a problem. Maybe he’s anxious about the deepening of your relationship, maybe he had a crappy day at work, maybe the issue you just raised scares him… Could be anything.

The work of every lasting relationship is to work through things exactly like this.

Don’t put off the work, even if it seems difficult. Everybody has a few faults (even you and me, gorgeous!). A man worth having will stick with you through hard times just as well as easy.

What if you could spark a man’s inner need for you in just 30 seconds?

You see, if you make a man feel a certain way, for even just 30 seconds a day, you’ll be awakening his inner desire to chase you, and romance you like you really want.

This is one of the most powerful attraction tips I’ve seen, yet it’s the easiest to implement.

If you’re frustrated with your man going cold, losing interest, or pulling away, then this video is a must watch!

–> Click Here To Discover What Men Secretly Want, But Could Never Tell You